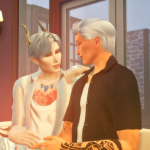 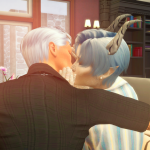 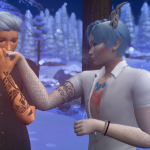 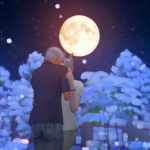 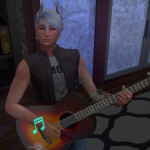 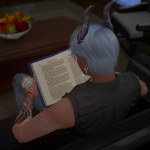 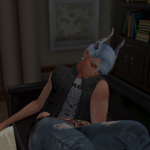 Chris just
chuckled, wondering if maybe he was making this surprise seem bigger than what
it actually was. But he also didn’t want to ruin the surprise, so he had been
adamant to not cave and tell him what it was.

Before
Hayle could answer he found himself pulled outside where the biggest moon he
had seen in a while greeted them.

They both
noticed it seemed to snow, yet they couldn’t really see anything but some very
light clouds. It was quiet too, just that creaking noise the snow made whenever
they put their foot down in the snow. They stopped, Chris gently putting his
hands on his husband’s face, just standing there in the quiet of the snow
gently falling around them.

Hayden
watched his parents head out for a walk with a bit of a smile, picking up the
guitar again, Rylan just looking at him from the sofa.

“You really
are getting good, you should do something with it.”
“Like what?”
“Dunno, try small playing jobs or so?”
“I think I’d like to be a bit better first.”
“But you will think about it.”
“Sure.”

He played
for a while longer, watching his brother sit there and read a book, with his
foot slightly moving to the music. After a while, he put away the guitar, put
on some music on the stereo instead, and joined his brother in reading.

He stopped,
noticing who was asleep in the sofa again. The first thought in his mind was to
get a blanket, but instead he just took the book out of his hand and put it on
the table before going back to his own book, looking up at his brother on
occasion to see that he was okay.

This entry was posted in Sims 4 and tagged and it was a strange night with moonlight and snow at the same time, and Rylan wants him to find something he enjoys to do, and the only sound you actually hear is the sound of the creaking snow, and their both bookworms, and this place just feels like it would have just that sound, bachelorreaper, Christian Ward, did I mention I love this family?, even if one tends to fall asleep randomly, Hayden is very good with that guitar, Hayden Ward, Hayle Ward, I love it, it's a special sound when it's quiet outside a winter  night, Rylan Ward, simblr. Bookmark the permalink.