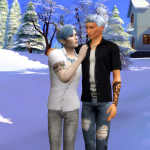 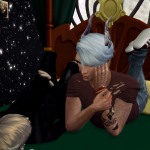 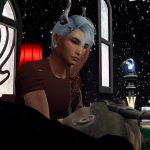 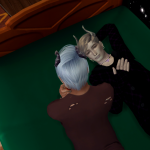 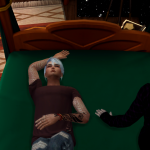 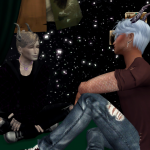 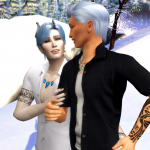 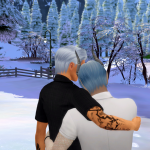 “So how did
they like the water?”
“I think they loved it, it was nice to see them play around almost like back in
the ocean.”

Hayle had
taken both boys with him when they came home from school, showing them his
surprise, ending up being dragged into the water by the both for a game of tag.

“Did Rylan
mention it to you too?
“Yep.”

Rylan
looked up at his brother, they tended to hang in his brother’s room more than
his. It was slightly bigger, but it was also a lot colder than he had his room.

“Do you
remember that add I told you about?”
“The shelter one?”
“Yep!”
“Well yeah, you mentioned it, but then discarded it because it was too far from
Sulani.”
“But… we no longer live at Sulani, we live here… and I may have contacted them
to ask if they still had an opening.”
“And?”
“They still needed people.”

Hayden
looked at his brother who gave him a look he had seen many times before. He
knew he had some elaborate plan for all this, but he couldn’t quite see where
he fit into it. Then again, he had been with him for some model shoot’s
already, mostly just watching them, occasionally “working” holding something.

“Okay, out
with it?”
“Well, they need someone that can just be there and give the animals attention.
Living in a shelter is not really what they are made for, so they crave human
contact.”
“Do really qualify as that?”

Rylan
chuckled, shaking his head at his brother.

“Yeah, you
do have hands that can say brush or just pet an animal, don’t you? And you are
trained by Felix to kitty cuddles so why not?”
“I guess I can try?”
“Good because I may have already said yes for both of us and we will start in a
month’s time, they didn’t have time to train me in what I needed to do right
now.”
“Seriously?”
“Yep!”
“So, you said yes to them first, and then asked me… why?”
“Because then you couldn’t really say no.”

Hayden just
shook his head, he did like the idea though, it was a good reason to get out of
the house, and perhaps feel like he had some use. If nothing else, he could
hopefully make a bunch of cats and dogs and maybe other animals feel a little
better with their day.

“You did
notice that guy looking at you at the library?”
“Ehm… no?”
“The red-haired dude, Crazy Ron I think they called him.”
“Really?”
“Yeah, he has been staring at you every time we been there, me too, but mostly
you.”

Hayden just
looked at his brother, not really sure where he was going with it, he hadn’t
really noticed it at all, he had however head the name used when he was there.

“Then next
time we go, I guess I’ll try and notice.”
“Heh, I’ll believe that when I see it, you get lost in the books there in seconds.”

Hayden
chuckled, as his brother wasn’t wrong, but there were just so many books there
he had never seen before, so it was hard not to.

“You think
Rylans plan will work?”
“The shelter?”
“Yeah, getting Hayden out of the house, doing something that feels important?”
“Mhm, I think it will be good for him.”

They looked
at each other as they walked. They both heard Rylan and Hayden discuss it
sometimes when they were doing homework, where Hayden would always just shrug
his shoulder knowing a normal job was not something he would be able to do. So,
they hoped perhaps his brothers idea would be just what he needed.

This entry was posted in Sims 4 and tagged and he has a point, and he knows it's the type of work they might both enjoy, and it fits between school and his modeling job, at least that is what Rylan figured, Christian Ward, easier to beg for forgivness than permission, half god, hands that can cuddle, Hayden Ward, Hayle Ward, or dragon, petting animals is important, Rylan Ward, that is all, there isn't much he can reliably do in his condition, they need human contact. Bookmark the permalink.