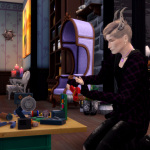 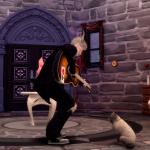 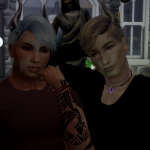 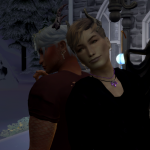 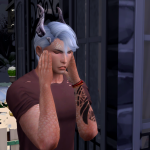 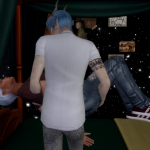 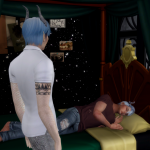 “I wonder what they have us building this time.”
“Probably something we already done before, this at least looks awfully familiar to me.”

Finishing his project a bit before his brother he decided to keep him company by trying his hand at the guitar. He was okay with it, nothing like his brother, but it wasn’t half bad to listen too.

Hayle joined them to help take a couple of pictures, Rylan noticing his brother feeling warmer than normal again, so after just a couple he said that it was enough.

He could hear the footsteps of his father behind him when they were walking back to the house, the instant almost blinding pain shooting too his head made him stop, feeling himself get lifted up as the world around him disappeared.

Hayle looked at his son as he carried him up to his bedroom, opening the windows to let all the cold inside to help him recover faster. Rylan looking at them from the doorway, before closing the door behind them to keep the cold from the rest of the house.

“I’ll sit here with him for a while.”
“Shouldn’t you go to work, that was why we took the pictures?”
“Yeah, but I’ll call and say I’ll be late.”
“No you won’t, go, I’ll sit here with him, and I will call you if you’re needed here okay? You know as well as I do, there is nothing you can do other than just sit here and wait.”

Rylan sighed, he knew that his dad was right, but it always felt bad to leave when his brother was like this.

“Now go, and I promise I’ll message you if you need to come home for anything., deal?”
“Fine.. deal.”

He took his dad’s camera with him as he headed out the door, knowing he was to meet a new guy there today, a sort of a partner he would have for most of the shoots from now on. He only remembered the first name; Carl.

Hayle watched Rylan leave, sitting down on the bed next to Hayden. He knew a day like this meant it was normally a long while until the next one, which in some ways was a good thing.

“Well, if nothing else, this hopefully means you can both go to the shelter this weekend.”

This entry was posted in Sims 4 and tagged after a while, and Rylan is not as good with a guitar as his brother is, and yes, but he isn't half bad either, but they are much further between and often last shorter, Hayden Ward, Hayle Ward, it's still better, Rylan Ward, so even though they would like them not to happen, so they become something they have done befoe, these episodes still happen, they still enjoy doing them though, you get the same school projects again. Bookmark the permalink.