Itsuki stood looking at the huge old house in front of him. In the last two days his entire life had been turned upside down, and in these two days he had understood more about himself than he had done in all his years until then. All he had to his name was this house, and his inheritance. For someone who spent all his life in foster care, it was almost too much to take in. 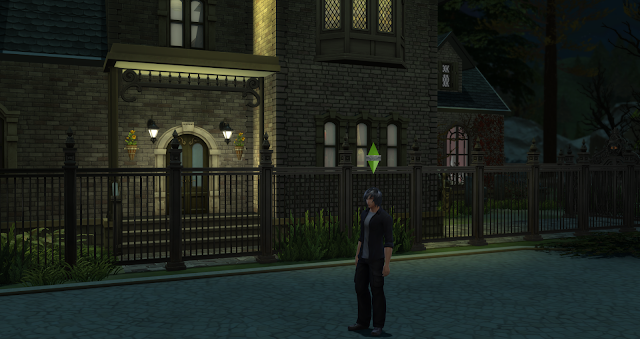 It was the day he had been longing for since he could remember. The day when he would finally be free of the system, and could do all the things he wanted. As he stood there looking at the cake and the dancing lights of the birthday candles he couldn’t help but smile.

It had a nice ring to it, and although his foster parents had always been good to him, he simply could not wait for what life had in store for him. Taking a deep breath, he blew out the candles to the cheers and applauds of his family. A strange feeling engulfing him; almost as if something more changed right then and there. Shrugging it off he sat with the others, eating his cake when his “mother” walked over to him with what looked like a present.

– This was always meant for you, but it came with a note telling us to only give it to you when you were 18.

She smiled at him, handing him the neatly wrapped present. As he took it from her, the same strange feeling as a little before swept over him. Looking at her he just nodded, before looking back down at the package.

-I’ll let you open it alone, as the note said.

He looked at her, before grabbing a slice of the cake, and walking into his room. For a while, he had the package on his bed, slowly eating his cake. Finally though his hands reached out to it, opening it carefully, as if almost afraid it contained something bad.

Inside the package there was a small box, a book, and what seemed to be a letter. Leaving the box and the book, he took up the letter, reading it slowly 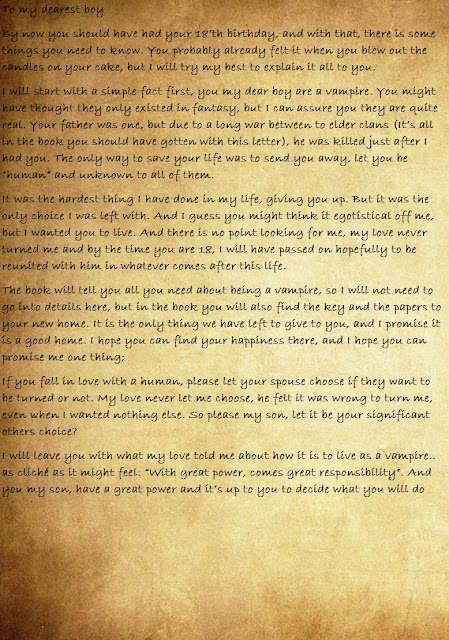 He read the letter a couple of times realising he finally knew his real mothers name. Before his hands finally slumped into his lap. His mind was racing with all the new information. Although it had been written long ago, there were still visible stains on the paper, looking like she had been crying when she was writing it. A vampire, could it really be though?

His eyes fell on the book, picking it up gently. It was a pretty large book, with a sigil on the front and some letters he could not quite make out for some reason. As he opened it, he noticed a key, as well as a picture of two people he had never seen before. 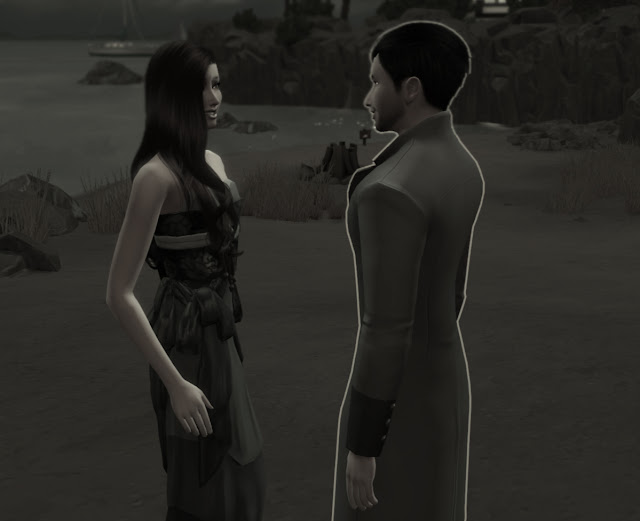 Putting the picture down, he also noticed that with the key came a description to where the house was, as well as what could only be the info to a bank account. Finally he did the only thing he could do in that moment, pinching his own arm as hard as he could, just to see if this was just a dream.

It had not been a dream, and that night he had fully changed into a vampire while reading the book left to him. He now knew who his parents were, what had happened to them, and he had gotten a general idea of what he had become. As he took out the key from the book, and walked towards the entrance of the house, another cliché hopped into his mind. This was now his story, and he knew just what he wanted to do with it.

6 Responses to Generation One: Prologue