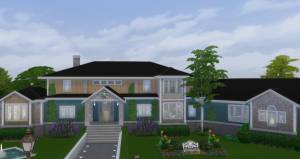 “Wow…”
It was quite a different house that was standing in front of them as they walked out of the car. Much like she had said, it wasn’t as big as some of the biggest houses they had, but it also wasn’t as small as what they had lived in before.
“And it has a much bigger garden in the back too.”
She had after all decided that she wanted to work with plants, and well, if she was to do that, she would need a proper garden to work in. 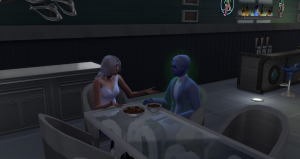 “Wait.. bees?”
“Yeah, I talked with my new boss, and they said they would send some over.”
“Ehm… you know they might sting you?”
“Yeah, but I am learning how to bond with them, and hey, honey is worth it!”
Mostly she knew it would help her garden grow. While her siblings were finishing up the school semester, she had started working as a botanist part time. That way, she would have something to go back on when she stopped with the skating.
“Have you guys decided what to do after next week?”
“Not really, I think the only grand plan is to move out.”
He did notice the somewhat sad look her sister gave him, if only for a second or two.
“You really think you will miss us?”
“Yes, of course I will!”

It didn’t take long for her boss to keep up on his word and send her the bees.  Although she hadn’t expected three of them, she decided to do as she had been thought, and start the bonding process with them, in hopes of not getting stung every single time she was in her garden to work. Of course, she did expect some stings, but they had tested her and her family for allergies before she got them.
“Now.. I am sure we can be friends.. in time..” 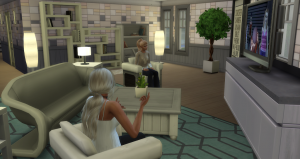 “Soo, their all moving out tomorrow?”
“Yeah..”
“And I think my parents will too…”
“They have been talking about it.”
“But you will still stay right?”
“Of course we will.”
She already dreaded the next day, knowing how quiet the house would be. One thing was the fact that her younger siblings would move out, and entirely different thing was that her parents were also leaving.
“I guess they do deserve some time alone..”
“They do, although I heard some plans to adopt a dog or a cat.”
“Hmh.. that’s not a bad idea..” 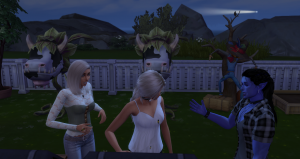 It had been a long and emotionally draining day already when she found herself outside in the garden talking to her parents.
“You managed to get them to grow.. wow..”
They were discussing the two cow-plants she had gotten from her boss to try and grow. Of course with the proper safety precautions of teaching her how to feed and care for them.
“Itsuki said they had one of these before… but I have never seen one, I am impressed.”
She knew why they were really out there with her. She already missed her siblings who had  left earlier that day, and now, it was their time to leave.
“I know it will be wierd, but think off it as some time to just be you okay, do the things you want to, and don’t rush things. You know where we will be, and you are always welcome to come visit.”
“I know.. “
She felt herself pulled into one of those hugs that only her father could give.
“And hey, we will be going to your competition this weekend, you’ll see us before you know it.” 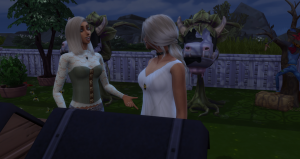 “You’ll do wonderfully honey, I know you will.”
“What.. with the skating or the legacy?”
“Both.”
Her mother pulled her into a hug as well, as they walked together to the taxi that was waiting for them. Waving them off, she turned towards the house, that suddenly felt like it was much to big.
“Adopting. yes!” 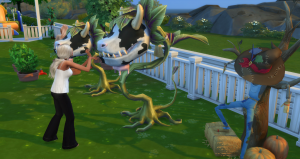 “And when we get them, you two behave, okay?”
She wasn’t really sure how much her plants understood. But the last thing she wanted to happen was for her new kitten and puppy to end up being cow-plant dinner.
“You’ll help watch them, won’t you patchy?”
She smiled as to her, it almost felt like the scarecrow gave her the slightest little nod. 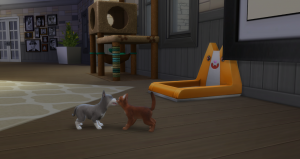 Much like Majora and Kona, she had come across a cat and a dog that was up for adoption together. Truman was a breed she had never even heard of before Norwegian Buhund while Zoey was a mix they were kinda unsure off.
“So.. will he be really tiny?”
“They thought he would be, its a small breed.”

“So small!”
She had to admit, the house instantly felt more alive, and at the same time, she had the odd feeling they were pretty much instantly the new bosses off the house.
“Just stay away from the big plants in the garden.. okay?”
“miuau” 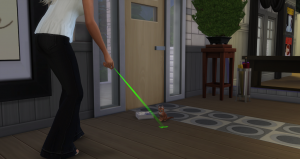 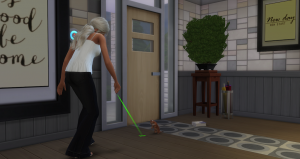 “Heh.. I remember Majora enjoying this.. I guess you do too.”
She hadn’t realized just how much he had missed having animals in the house, but now that she knew, she would try to keep it so that they had one always, at least as long as she was in “charge”.
“Now.. if I could only adopt the perfect guy as well huh?” 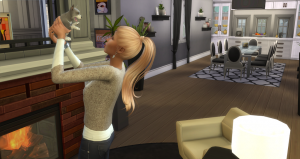 “So cute, yes you are!”
Both Nagisa and Itsuki were all taken by the two new family members. It was hard to resist their large begging eyes whenever they wanted something, and it was like they knew it.
“Yeah, just what we needed, that’s what you are.” 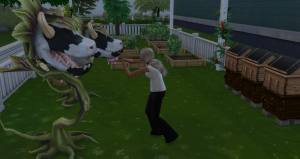 “Of course I haven’t forgotten you two, and thank you both for being good plants and not trying to eat the little ones.”
She had noticed that they both had a little bit of their own personalities, and although her boss had said they were just a type of carnivorous plant, that there was something more to them.
“Hmh.. maybe I should give you two names as well?”
She looked over at Patchy for a bit as her mind wandered on what she might call the two of them.

This entry was posted in legacy story, Sims 4, Vampyracy. Bookmark the permalink.