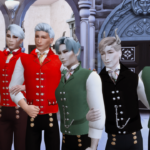 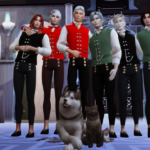 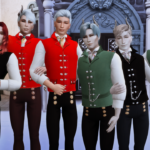 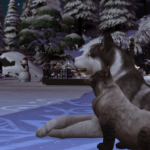 Today is my countries National Day, so there will be break in the story, just so I can show off my boys in their new shiny Bunad’s. This is a very traditional Norwegian garment, most know probably the female versions, but I only have guys.. ( I was tempted to put Vy in a dress, I will admit to it!)

Our national day (just known as 17th of May..) is not like most countries I think, it is based around kids, which is shown by their being kids activities all day long, and it has the important foods like hot dogs and ice cream. Its the one day of the year where your parents will say yes to more off it all.

Of course this year is different, like it is for everyone, none of the bigger celebrations like normal but smaller stuff around the place, and of course NRK (national tv channel) has it’s yearly tv show which is also different. For me.. the only difference is that the tv show is different, I don’t have kids, so I have hot dogs and ice cream and I watch that tv show they always have on.

So I shall say like we do today: Gratulerer med dagen Norge!

(Poses were made by @simmingkatie and the Bunad is made by @alialsim who also have female versions!)

This entry was posted in Sims 4 and tagged 17th of may, and candy!, and hot dogs, bring on icecream, but we make the best off it., it is like everything this year different, my boys are of course up for showing off, none sims stuff, the ward legacy. Bookmark the permalink.