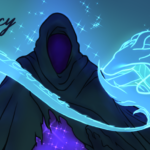 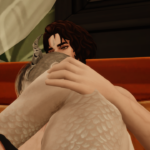 You guessed it, under the line.

He holds onto Rylan, feeling the strength with which he holds him, but he ignores the crushing pain in his arm and focus. He has to do something, anything. Ignoring what Hayden and Rylan had told him, he decides to focus and hope, begging with all his power and all his love that this works, as his eyes start shining again and he conjures the calming spell, all his strength on it, just begging it is enough.

He holds Rylan close, arms wrapped around him as he pulls Rylan to his lap, against his chest, the magic flowing, his eyes glowing.

Rylan’s breath slows, keeping in line with Rivers, the grip on River’s arm slowly loosening without letting go, Rylan looking at River when he talks, his voice comforting, soothing and his eyes glowed. Oddly enough it became a focus, the focus he needed to make River come into focus as well, hearing the words he says clearly in his mind unlike before.

His voice is low, strained, but he is clearly more focused, tears starting to form in his eyes as well.

Rylan curls up slightly in Rivers arms as if to somehow get closer to him, still holding on to his arm, although now just lightly as if it just keeps him safe, to have that arm to hold on too.

His eyes are locked with River’s, the one holding point for him right now are those eyes, be they golden or blue.

“But mostly frog.”
“Frog prince and Flynn Rider. If we ever have a son, we’re naming them Flynn.”

River sits against the head of the bed, holding Rylan tight against his chest and over his lap, his eyes slowly returning to normal, as his magic subsides, just that gentle hum still flowing. His hands draw circles on Rylan’s back and he smiles gently.

“You’re safe now, I’m with you and I am going nowhere. Tell me more, tell me about the new shelter, which pet you like the most? Lobo doesn’t count. He is ours.”

Rylan shivers slightly as he is still fighting his own body, but he keeps his focus on River and what they’re talking about, following how River breathes to help himself keep it under control. They had gotten many new pet’s the time they had been open, but it was one of the first that he had his own little weak spot for.

He attempts a smile.

This entry was posted in Sims 4 and tagged and  he keeps talking to him etc, and does the magic work, but the most important is that he is there, He is having to work hard with this, it's not easy to  know, maybe it helps, no one really knows, or the glowing eyes does, River Silversweater, Rylan Ward, simblr, simblrstories, the ward legacy, this is a pretty bad one, tw anxiety, tw panic attack. Bookmark the permalink.