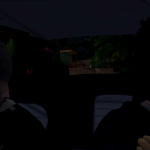 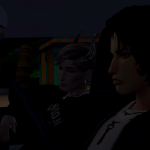 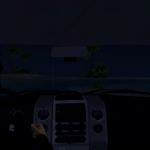 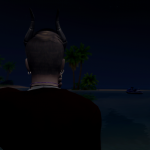 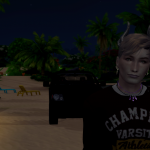 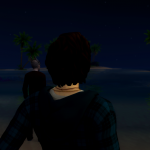 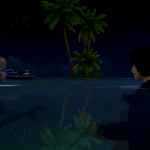 “So where are we going anyway?”
“It’s a surprise princess.”
“I guess as long as this date does not include cleaning more kennels, I’m good.”
“You may need to take off your shoes though.”

Rylan just looks at him, trying to think off where he might be taking him that would require shoes off. For a while, there is no talking between them, just Rylan watching the world as it passes, and looking over at River on occasion.

“I reckon a guy as beautiful as you has gone to plenty of dates before. So I just hope you will enjoy it. I did my best with the lil I make at the shelter.”
“If plenty of dates, including this one means one date, then yes, plenty of dates.”

Rylan looks out the window, wondering if he really gives out that kinda vibe, where he is the type to go on dates. Until River, it mostly had never even crossed his mind, he had enough with school, his brother and work. Still looking out the window, he doesn’t notice the look River gives him.

“You’re always surrounded by friends. Thought one of them would have said something by now.”

Grins playfully at Rylan when he turned his head towards him again.

“Be honest princess, you’ve been turning down everyone all this time because you were waiting for me.”

“Yep, I knew they weren’t right, they were just regular princes, not a single frog among them.”

“Not one of them made you experience the real good things in life. Like wiping shit from dog kennels and getting soaked by a 10-year-old husky and rescuing kittens from under rubble!”

Yeah, I am mostly the gamemaster actually…”

Looks at River, wondering if that was a piece of information he maybe shouldn’t have told him about. Perhaps it was just a touch too geeky.

“Too geeky for the macho one?”

“I have always wanted to play. But none of the guys I hang out with into that, but if you think I’m too macho for it… I don’t want to tarnish my princess’s view of me.”
“

Well.. never had a frog in the party before, I am sure Hayden could use one as a companion…”
“Only if you play my princess and I get a right to a kiss.”

As they talk, a beach comes into sight in front of them the two so busy discussing that Rylan doesn’t immediately notice.

“I’m the game master, you might have to go through the king, and then ask for a kiss from the princess…”

As he notices the beach, he goes quiet. It’s not Sulani, but memories of playing in the sea instantly flood back along with how much he has missed it. River just watching him.

As the car stops, Rylan is out the door having kicked off the shoes and left them in the car, only stopping when he reaches the water’s edge, staring out across the ocean. River walking up to him with a picnic basket in his hands.

“I was going to open you the door and go all “we have arrived, your highness” but… Yea… Are you okay?”
“Ah.. sorry, it’s just been a long while since I was at a beach. I literally grew up on one.”

Turns around looking straight at River.

“Remember I said I was half-dragon?”
“Yeah?”
“Come take a swim with me… and you may change my nickname slightly.”

River looks at him hesitantly as he takes off his clothing apparently without thinking much, leaving himself only in his boxer shorts as he wades into the water

“You might not want to swim with your clothing on?”
“I don’t mind, you can dry me off later.”
“Okay then.”

Rylan shrugs his shoulders, walking a few more steps before diving fully into the water, what seems to suddenly be a large tail splashing water behind him.

“Yo! Princess try not to drown! I’m not that great of a swimmer!”

Rylan chuckles before he swims back to River, his skin no longer having scales, but what seems more to be shimmering stars all over it, mirroring the starry skies above them.

“It’s hard to drown when you can breathe underwater frog-boy.”
“So beautiful.”
“I may have left out my dad is some kind of merman like race, which means, this happens.”

Waves his tail over the edge of the water, trying to figure out just how River is taking it as not really hearing the beautiful comment and all he seems to do it stare at him wide-eyed.

This entry was posted in Sims 4 and tagged and he hasn't quite realized that there is oceans closer by, and he still would not go witout said brother, and leave, and yes, as it is still the only place they can swim, but imagine it isn't, but merman too, come on ea/maxis, he doesn't feel like going there without his brother, he is half expecting him to go nope, he is nervous about what River will think.. not just dragon, He might have a new nickname now, I know this is sulani, it got a little long again, it has been a very long time since he has seen the actual ocean, it is basically next to an ocean!, make it possible to swim in brindleton if nothing else, River Silversweater, Rylan Ward, sorry!. Bookmark the permalink.