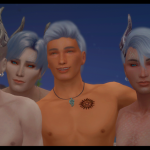 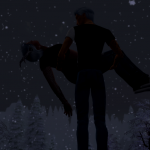 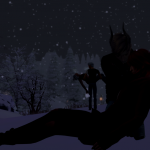 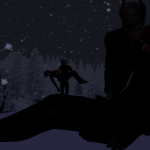 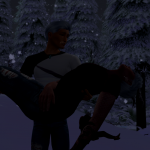 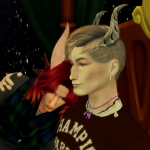 This story will hide under a line, I honestly don’t know what or how to tag it, but lets just say, for now, read on your own risk

Rylan looked out the window, that feeling was back a worry that nagged itself deep into your stomach, making you feel sick. Something was wrong, very wrong, but he couldn’t put his finger on what.

Rylan shook his head, but the feeling persisted, nagging the back of his head.

“Can you just check on him? I don’t know, something is wrong, very very wrong.”

Chris looked at his son, but he had learned that the bond between his two kids was a deep one, and both seemed to somehow know when the other one was hurt, or sick, or just sad. So he nodded, a second later grabbing Rylan’s hand firmly, porting them to the middle of the woods where the sight hit both of them.

About to run over he found himself stopped by his dad, who shook his head.

“Stay with Vy, I’ll take him home and try and get him cold. He is still alive… barely.”

The words sent a shiver down Rylan’s spine as he followed his dad, having to stop a bit away when his dad held up his hand. Chris walking slowly, picking up Hayden as carefully as he could, the heat almost hitting him in the face. Walking to the side he nodded at Rylan, walking slowly away, letting Rylan run up to Vy

He lifted Vy up, holding him tight, not getting any more answers from him, turning his head looking at his dad, wondering why he was still there. It looked like he was talking to someone, but there was no one there to talk to.

Chris turned around, looking at Rylan, then turned his head back to the one he was talking to. He knew her of course, they had worked together many times.

“Please give him a chance to pull through, don’t take him just yet?”
“Fine, but you know as well as I do right.”
“I know.”

With those words Chris vanished, appearing back in the house, yelling for his husband to make the house freezing.

The words got stuck in his throat as he just held Vy in his arms, the only thing telling him he was still alive was the small movement he could occasionally see his chest do. Fear was gripping him as he sat there, waiting for what seemed like an eternity in the snow when he suddenly felt a hand on his shoulder which almost made him jump out of his own skin.

“I’ll carry him, we have to hurry home.”

Rylan barely got to get to his feet before he found himself in their house, the walls covered in frost and he was pretty sure it was colder there than outside.

Chris looked at Rylan, who now stood with Vy in his arms, then he shook his head slightly.

“I don’t know yet, your dad called your uncle, he is coming to help as well. Take care of Vy, I’ll be by every hour and update you, deal?”
“Deal…”

He looked at Vy, taking a deep breath, taking him up the stairs and towards Hayden’s bedroom as he opened the door he gets greeted by both Lobo and Felix.

He maneuvers between the two, putting Vy gently down on the bed, sitting down next to him, just taking his hand, Lobo pushing his head on their hands, trying his best to help.

The cat just looks at him but waiting to let Rylan take most of Vy’s clothing, putting the blanket around him afterward.

“There, now you can sleep on him if you want Felix.”

A few minutes later, the bed was full with Rylan on one side, a knocked out Vy on the other, with Felix sleeping on Vy’s chest and Lobo making his home between them, and almost eerie silence in the room, until Rylan put on the tv, swapping aimlessly between the channels, watching Vy in case he would wake up, waiting for his dad to come and tell him news, if there was any to give, mostly wishing River was here, so he had someone to talk to while he waited.

Rylan sits on Hayden’s bed a book in his hand, a pod in one ear letting him listen to music. He hadn’t been to school or work in a week now his parents had called the school, explaining that Hayden had taken a turn for the worse and that Rylan needed to be home, while Rylan himself had called work and the shelter telling them he had to stay home a while. All he had done for the week was take Lobo for walks or runs, and then been mostly with Vy not wanting him to wake up all alone, as well as checking on his brother on occasion. His attention taken from the book when for the first time in a week, there seems to be a stir in the person next to him, Rylan putting his book away, watching Vy carefully. As he notices him open his eyes, he gently places a hand on his chest to not have him sit up and move too fast

As his eyes spring fully open he flails his arms trying to get loose from Rylan a panic in his eyes and he frantically tries to get up.

Rylan puts a little more of his weight on his hold to keep him down, leaning over him so he is sure he actually sees him.

“Slow down Vy, he is being cared for. You need to calm down, you are not exactly well either…”
“Hayden! I need to see him! I need to…!

As Rylan lets him sit up the world almost fades for him, gripping on to Rylan as the world slowly steadies and he realizes he has no energy, none.

“I can’t… I can’t heal…”
“Whatever they did to you Vy, you have been knocked out for a week… you need to relax, to get well again.”
“Hunters! They… they found me!  I thought they were gone! This is all my fault! It’s MY fault!”

He starts crying between his words, Rylan sighing softly pulling Vy into his arms, holding him tight hoping to stop him crying, but instead, it just seems to worsen the cries and the sobs.

“It is not your fault, it’s theirs, they hunted you, and they paid the price.”
“If I wasn’t with Hayden, this wouldn’t have happened! I thought they were gone! It’s been so long! I thought they had forgotten about me!”

Rylan keeps holding him tight, trying to calm him down somehow, but not really sure how too, he has never seen Vy this upset and sad. In the end, he does what River always did, and what his dad does with him, stroking through his hair and down his back.

This entry was posted in Sims 4 and tagged again, and he blames himself for it happening, and it hit the feels, and no, and that poison was strong, at least he is not dead just yet, at least Vy has pulled through!, but chris is takling to someone, but yeah, Christian Ward, even with sun and moonbaths given, Hayden Ward, I already felt shit when I wrote this, I am not going to say this story is going to change in how it feels for a while, I feel so bad for him, I wanted to hug him as I wrote it, it took him a week, Rylan Ward, sorry!, that is good right, the ward legacy, tw death, tw hurt, tw poisoned, tw sad, without me telling you, you might be able to geuess who, Yvreon Nebulae. Bookmark the permalink.