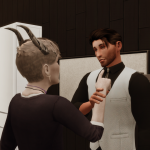 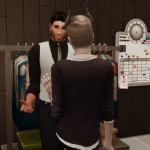 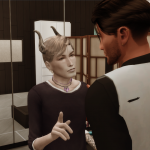 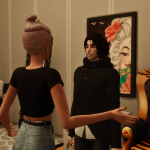 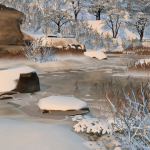 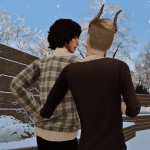 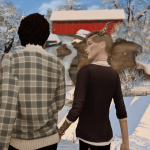 Rylan
winks and heads to the changing room to get out of said snazzy-looking clothing
before he became the laughing stock of everyone today. River just grinning at
him, letting him go change. Rylan looks at the clothing on the rack and shakes
his head again, turning around only to find his way blocked by Carl.

“What?”
“Why?”
“Why what?”
“He left you for three years, and you take him back, I was here all this time,
so why?”
“It’s something called love you wouldn’t understand that I guess, now get out
of my way.”

He motions for Carl to move without any response from
him, noticing that things Vy mentioned once how he seems to be away
somehow.

River stands outside waiting, hears Carl talking with
Rylan, he frowns but doesn’t do anything, waiting until he hears Rylan ask him
to move, so he knocks at the door, holding to his self-control not to burst in
and make a scene.

“Rylan, everything okay in there?”
“Yes, just someone needs to move his feet away from the door.”

He sighs and pushes Carl to the side before he opens
the door, and quickly closes it behind him.

“I wonder about him, to be honest… Like today, he
just doesn’t seem to be his normal asshatty self…”

River looks at the door then back at Rylan, taking his
hand on his

“Maybe he’s catching something? Like the Simian Flu?
Let’s go princess. We still have a postbox to check.”
“Hmh.. then he has caught the flu on and off for at least a year… Yes, let’s
go, and I have one very important question for later..”

He winks at River as they head outside the door, and
into the quiet world outside.

“What do you want for dinner?”

River thinks about food and shrugs.

“Anything, really. I haven’t eaten anything decent
since last night. The Postbox is near so it will only take us a few minutes to
get there.”
“How about sushi? It’s mild, I mean if you skip a certain thing, and I know you
like it?”

He smiles at River as they walk.

“Three years of wondering what that meant, and today
we’ll know.”

He looks at River, wondering how he feels about it.

“Sushi.”
““If you want to, I can make something else, like homemade pasta?”

River hesitates. The last time he ate it was the day
he ended the daydreams, after that, Rylan didn’t contact him again. For a
while, he thought that meant Rylan had decided to move on and he felt
abandoned. He was thankful Rylan had found the strength to move on, find
someone better than him. But deep down it hurt so much, he felt abandoned, sad,
and he wanted to be with Rylan, without Rylan and then without the shelter, it
felt as if his life had lost all purpose and meaning. When his master entrusted
him with watching over them, he was happy, even if it was just to watch Rylan
live and be happy. He shakes his head and looks at Rylan, realizing he’s
squeezing his hand a little too tight and he lightens it.

This entry was posted in Sims 4 and tagged always refusing his advances, and he just doesn't get it, and here we go, and Rylan just waiting, at all, but he sees it differently, Carl Rosenthal, he sees River leaving him, pretty sure River wants to punch him, repeatedly, River Silversweater, Rylan Ward, simblr, simblrstories, the ward legacy, we also do not like Carl, we finally get to know the faith of the shelter, we really do not. Bookmark the permalink.