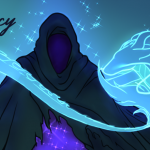 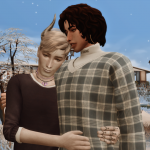 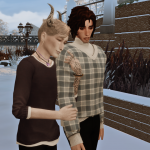 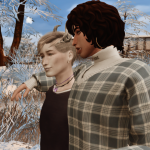 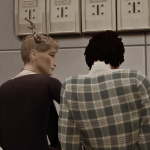 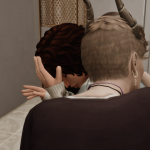 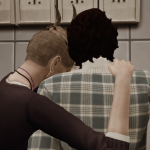 “Sorry…
I bet there are only old belongings of mine, mom didn’t have the heart to dump.”

Rylan notices how he seems so far away for a while,
wondering if it had something to do with his food suggestion, smiling at him
when he seems to snap back to here and now.”

“Hmh… I still think there is more to it.. but now we
will soon know.”
“I’ll eat anything, really… as long as it isn’t too spicy.”

He smiles and kisses Rylan’s hand, feeling horrible
for having squeezed it too hard. He almost hurt Rylan and he didn’t want that.
He probably would have to eventually talk with Rylan about this, about every
now and then snapping. Though his magic no longer flared, his emotions and
reactions did. They arrive at the post office and they go in, River taking
Rylan to the postbox, stopping there, looking at the small locker.

“… Okay… “
“Whatever is in there, we handle it together, you and me, and the rest of the
family.”

Suddenly River felt anxious as he pulled out a small
key bound by a necklace and then he opens the postbox. Inside he sees papers
and envelopes, which was not what he expected. River blinks surprised at all
the papers, having expected his old things, but instead finding the envelopes
he picks them up. One is a letter and the other a folder, he opens the folder
first, his eyes widening at what it is. It’s the papers for the shelter, placed
in his name as the sole owner of the building. He quickly closes the folder,
too shocked to comment, just handing it to Rylan as he picks the envelope and
opens it, a letter from his mother. He closes it and opens it again and sits
down, staring at it, debating rather he should read it or not.

“I think you should open it.”

Rylan takes the folder, looking at it, seeing that
River is now the owner of the building that he has walked passed so many times
the last three years, smiling a little, holding the folder in his hands as he
sits down behind River, wrapping his arms around him, leaning his head on his
shoulder.

“I think there is more behind her leaving than what
she told me that day… But if you’d rather wait, then that is fine too.”

River nods and opens the letter, and starts reading to
himself

Dear River, I’m sorry I left, but I had to
move on. I kept asking Simeon about you, I kept trying to get news from you,
but they kept lying to me, I didn’t believe them. I’m so sorry. I realize now I
never knew you, your father ruined everything between us, but I didn’t help, I
kept chasing after the shadow of him, pushing you to be the great mage he saw
in you, forgetting to look at you and see you. I never saw how magic hurt you,
and I chose to ignore the scars it left on you. After you left, there was this
hole in the Shelter, a hole in my life, I never realized how important you were
to both these places until you were no longer there. I wanted to make sure you
were happy and you were well, but lies Simeon gave me told me otherwise and I
realized I may have made a mistake by forcing you to go there. But there’s no
way around it. I can’t keep waiting forever. I met someone, I have met him a
long time ago, I never told you because we never talked. I know I didn’t make
it easier, so I am to blame. But, he wants to live with me and I can’t keep
leading him on, so I’ll move in with him. Start a new life. I know you might
never return, but I wanted to be a good mom at least once in my life. The
shelter was never mine, it was yours, so I think it’s only fair I give it to you.
It was your dream, to be a vet, like me, maybe you were trying on your own
accord to get close to me and I was too blind to see. But it’s legally yours. I
also left you a gift, it’s not much, a small trust fund so you can go to
college and take that degree in veterinary medicine. Be a vet like you dreamed
of. I miss you River and I love you. I hope you’ll forgive me and I can see you
again one day.

Below there is an address and phone number. River
sighs and puts the letter back down on the envelope, he’s trembling and starts
chuckling, covering his eyes. Rylan just holds him tight as he reads, wanting
to be there for him as much as he has been there whenever Rylan has needed
him

“I guess she didn’t believe them either…”

He notices the chuckling and the trembling, not really
sure what to say, the only thing that comes to mind the simple, but true.

This entry was posted in Sims 4 and tagged and again, and an adress, and everything!, and here we go, and we now notice something new with River, because I think right now, but his emotions?, he can control his magic, in a while, just waiting for him to come home, maybe there will be a reuinion there too, River Silversweater, Rylan Ward, Seems she didn't believe them, simblr, simblrstories, thank you shah for all your help with River, the letter, the reason why they could never buy it, the ward legacy, there is a phone number, this is enough, was because it was always River's, what the effects of all that has happened to him is. Bookmark the permalink.